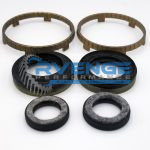 OEM is the only option for 5th gear and you will need to choose hub type early or late. Generally this changes over 91-92/93. If you have the smaller 7mm input shaft bolt it is especially likely you have the early model synchro. The early model synchro has a relief cut into its circumference to clear a raised lip area in the hub. If you use a later synchro in the early hub it will crush the synchro.